In the Spring of 2012 I made a life changing decision when I decided to join the Mystic Krewe of Nyx.  I really wanted to be a part of a women’s krewe and had watched the very first Nyx parade roll in 2012 in the pouring rain.  As my first months passed I attended any event that I could to meet people.  The Krewe’s signature throw was a decorated purse and I was very intimidated by the thought of having to do these.  I attended my first purse decorating party in October with absolutely no clue of what I was getting involved in.  The thought of glittering a purse frightened me but I knew I needed to do it.  During that party, as the group chatted away, the idea of having a way to track where our purses went was born.  I walked away from that event with my very first decorated purse and went home.  It was after that event that I sat down one day and created on Facebook a new page called the Nyx Purse Tracker. 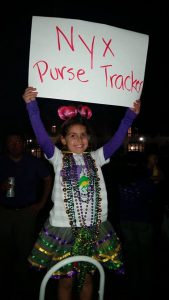 It began small and the first year only had a couple hundred followers.  The idea was that riders could add a card, label, or tag that asked the recipient to take a photo of themselves with their catch and post it to the Purse Tracker page so that we could see where and to who our creations went to.  I remember getting up the morning after the 2013 parade and taking a look at it.  Posts were going up.  That year we only had a relatively small handful of posts.  About 50 people posted their photos on the page.

The next year I decided to start posting teaser photos of purses prior to the parade.  This was a fun way to feature some of our creations and get interest from the public to attend the parade. That year I did a purse countdown to the parade and posted a new photo each day for the 50 days prior to the parade.  I have always been very stringent on my self-imposed rules on posting photos.  Photos had to be unique to the page and not have been posted previously.  So if a rider posted a photo to the page themselves I would not repost that as a feature photo.  I was careful to seek permission from the creator to post their photos.  Some riders gave me carte blanche permission to use any photo they had.  I love those riders!  It makes the job so much easier.  Gathering photos for a countdown is the hardest part.  As the 2014 parade approached I was getting messages from all over asking “How can I catch a purse?”  So I started telling people to make signs.  It was a thrill that year to see Purse Tracker signs on the parade route. 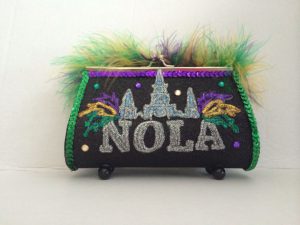 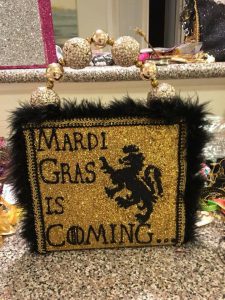 That year we had about 150 people post photos.  The excitement was also building with the riders who search Nyx Purse Tracker trying to catch a post of one of their creations.  The whole idea is completely voluntary on both ends so there is no requirement to put a card on a purse and of course there is no way to ensure that even if there is a card on your purse that the recipient will post a photo.  But after that 2nd year the site was off and running.  It was growing practically by the minute.  Interaction between riders and followers grew as more and more teaser photos were posted.   By 2015 the followers had grown to almost 2000 and instead of a 50 day countdown I did a 100 day countdown.  I learned along the way that posts that I made at 6 am had more impact than one posted later in the day.  Based on that information I began scheduling posts to hit early in the morning to have the most reach possible.   I have connected with people from all over the world through Nyx Purse Tracker and photos have been posted from many different countries.  We even had one recipient take her purse along with her on her travels.  We never knew where the traveling purse was going next and it was fun to find out when she posted a photo. 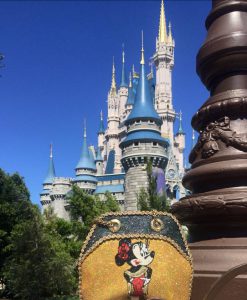 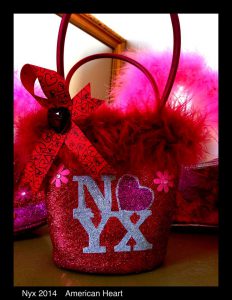 I also met a number of people through Nyx Purse Tracker.  Two really stand out for me.  One was a lady that reached out asking how could she catch a purse.  I of course told her to make a sign.  We conversed back and forth a bit on what that sign should say.  I finally told her to put “Jackie From Maryland” on the sign so I would know who she was.  As we rolled down Napoleon there she was with her sign exclaiming who she was and I managed to throw her the bag I had prepared for her.  After the parade she posted her picture and we continued to converse and became friends on Facebook.

The 2nd person that stands out that connected with me is a lady who posted a photo.  As we rolled down Magazine Street a man came up to me begging for a purse for his wife.  You KNOW that story.  I laughed and said “You really have a wife?  Where is your wife?”  He pointed back to a lady in the crowd who was waving away.  I gave him that purse!  Later Pamela posted a photo and we also connected and became friends.  I had never met them in person.  One lived in Maryland and one in Michigan. 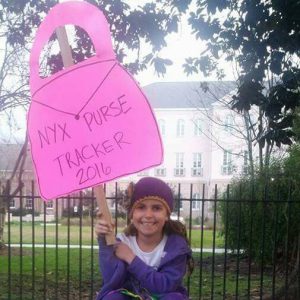 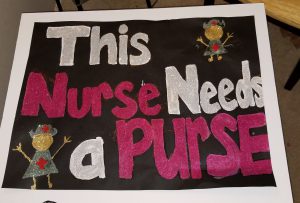 This past year both of those ladies rode a couple spots away from me in their first Nyx parade as my Nyx sisters.  So the bottom line is that Purse Tracker now has over 5700 followers and is growing every day. It has become a place for people to connect all over the love of Nyx and catching purses.  It has even helped get a rider’s actual personal purse that she accidentally threw off the float back to her when the person who caught it posted asking for help in returning it. 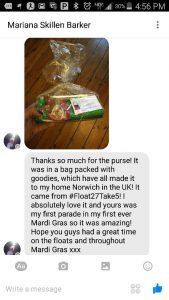 This past year we had hundreds of photos posted from all over the world.  Seeing a creation you made in the hands of its new owner and loved as much as we loved them provides a feeling like no other.  We would love to have thousands of photos posted next year. Please follow along on our purse journey by liking our page. https://www.facebook.com/NyxPurseTracker/

Del Hamilton is a seven year member of the Krewe of Nyx.  She is also a Float Lieutenant and assists the krewe with its preservation of archives.  Additionally, she is a connoisseur of purse decorating!  Watch her making some beautiful Nyx purses for the 2018 parade .